sports.lc
Admin
posted on 1 month ago
75
views
News
One of 2021's most anticipated bouts will roar into action in Las Vegas on Saturday as heavyweights Tyson Fury and Deontay Wilder meet for a third time.

Britain's Fury will defend his WBC crown against the American, who he stopped in the seventh round during their second fight 20 months ago.

It was Wilder's first defeat of a 44-fight professional career and sparked him into accusing Fury of cheating.

"Deep down in his soul, he knows he lost and he'll lose again," said Fury.

"After this fight, he'll be back working in that fast food chain that he was working at earlier on in his career. It's retirement for him.

"You're in denial and you're getting knocked out. Do yourself a favour and retire - your legacy's in bits, all the excuses, you've been destroyed. No one's even believed you, everyone's laughing at you. You're a weak man."

In the weigh-in both were the heaviest they have been for a professional fight with Fury at 19st 11lb and Wilder coming in at 17st.

There was no face-off as usual, with promoter Bob Arum having said he felt the process treats fighters like "animals" and that he did not want them getting hurt before their bout. 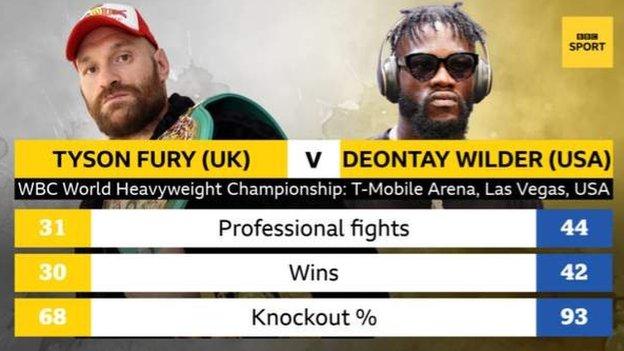 The pair first met in December 2018 in a bout that ended in a controversial draw, but Fury was rewarded for taking the fight to his opponent last time out.

Afterwards, Wilder blamed the weight of his ring walk costume for draining his energy but also suggested Fury's gloves were tampered with.

Since then, the 35-year-old has parted ways with coach Mark Breland, who threw in the towel against Fury, and brought in former heavyweight opponent Malik Scott.

"I ask the question, if I only won because I cheated, what was the point of changing everything and doing all this other work?" said Fury in a heated final news conference.

"I don't care because obviously it's coming from an unwell person. He accused me of everything: His team, his trainer, the suit, injuries, the State Athletic Commission of Nevada, the referee.

"If he'd have come out with one of these excuses, it would have been believable but not 50 of them. He can believe what he wants, what it tells me is that he's a weak person who I'm going to knock spark out on Saturday night.

"There is no rematch, this is it - anything is open to negotiation. After the fight, I don't think Fury will want any more of Deontay - but if he does and we can't get Joshua or Usyk because they are fighting each other, who knows? But my gut is we will have seen the last of each other."