sports.lc
Admin
posted on 6 months ago — updated on 3 weeks ago
2,940
views
You know an innings by an England player is a good one when even the Australians applaud it.

That's the case with Jos Buttler, whose stunning unbeaten 101 off 67 balls set up England's 26-run win over Sri Lanka in the T20 World Cup in Sharjah.

David Warner was part of the Australia side on the receiving end of a Buttler barrage two days ago.

But he was quick to show his appreciation for a century of the highest class on Monday.

Just how good was Buttler's innings?

Captain Eoin Morgan, who has played more T20s than any other England player, described it as "one of Buttler's best ever in an England shirt".

"It was incredible to be at the other end and to watch the ebb and flow and then sheer domination at the end," Morgan said.

"He is one of the best in the game and it is a privilege to play alongside him and have him in our team."

Asked what makes Buttler so special, Morgan said: "It is a combination of the unbelievable skill level and the calm nature that he goes about it.

"He combines that with reading the game, where to score and when to score."

All-rounder Moeen Ali, who was at the other end when Buttler reached his hundred, said he "played it perfectly".

"It was a fantastic hundred - one of his best ones," Moeen told BBC Test Match Special.

"The way he's playing, the way he's smart with his batting and the way he can adapt just shows how good this team is and how good he is."

"It is a nice stat. I don't really play the game for stats but I'm just excited with where I am with my batting and for the rest of the tournament," Buttler told Sky Sports.

"I remember saying a while ago that if I could put both parts of my game together, from opening and being in the middle order, then I'd be getting in a really good place with my T20 batting."

Fifteen other men have achieved the triple-ton feat, but only one woman - England women's captain Heather Knight.

An innings of two halves

If Buttler's brutal innings against Australia was impressive for its clean striking, this was even better, built amid the wreckage of 35-3 on a slow, low pitch.

He spent 45 balls over his fifty - his slowest in T20s for England. The next 50 runs came from only 22 deliveries as Buttler unleashed his wonderful array of shots.

Pace bowler Lahiru Kumara was pumped over long-off twice in an over and Dasun Shanaka was hoisted for two successive leg-side sixes, followed by a four, as Buttler led England's late assault.

Morgan, his partner in a crucial fourth-wicket stand of 112, fell in the 19th over.

Buttler, on 95, failed to score off the penultimate ball of the innings.

But the coolest person in the ground sent the next delivery sailing into the stands over square-leg to take England to 163-4.

"Experience helps a lot and it helps you to keep calm," Buttler said.

What the numbers say

If there was any remaining doubt over Buttler's best place in the England batting order, this will surely have settled the argument. 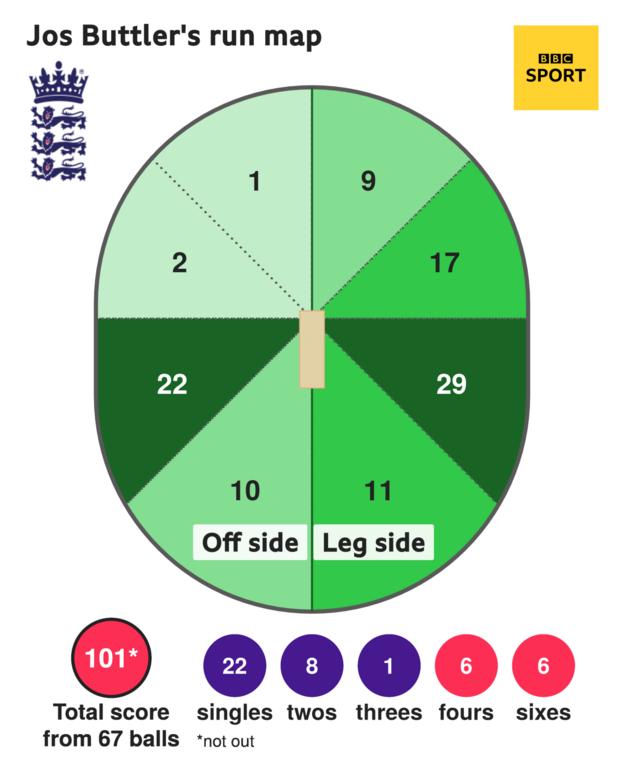 But what was the moment that Buttler described as his "favourite part of the day"?

It was this bit of brilliance in the field [see video] to run out captain Shanaka at a key moment as Sri Lanka threatened to pull off an unlikely chase.

But we'll leave the final words to you...

Dr James Pope: Jos Buttler is very very VERY special. Given the pitch, he paced a genius innings to score a brilliant hundred.

Bowser: Jos Buttler is superhuman. What a man.

Rob, Hampshire: Someone get Buttler a (solar-powered) flight to Glasgow. The form he's in, he'll have climate change cracked before our next game.