Steven Gerrard to Aston Villa: 'A gamble with risk on both sides'

sports.lc
Admin
posted on 3 weeks ago
40
views
News
Aston Villa's swift and slick appointment of Rangers manager Steven Gerrard as successor to the sacked Dean Smith suggests this was a move that did not require a great deal of persuasion on either side.

Villa chief executive Christian Purslow knows Gerrard well from his time as Liverpool managing director and the club immediately made him their number one target, having had their admiration reaffirmed by his work in Glasgow, winning Rangers' first title in a decade.

Gerrard, meanwhile, had no hesitation in returning to the Premier League with Villa, a club of stability and ambition where he will be guaranteed financial support from owners Nassef Sawiris and Wes Edens.

Rangers have discovered, as Celtic did before them when Brendan Rodgers moved to Leicester City after huge success at Parkhead, that even the Old Firm cannot complete with the lure of England's top flight.

So Gerrard takes the next step in his managerial and coaching career at a club where his reputation and career wins him instant respect and adulation - but there is a lot riding on this for both parties.

Gerrard is far too smart to allow himself to be painted as someone using Villa as a stepping stone and anyone who doubts his total commitment for every second of any task does not know him - but everyone does know his ultimate goal is to manage Liverpool.

This, however, hardly spells bad news for Villa because this fiercely ambitious character will be focusing all his energies on his new job. Do not believe for one minute he will be thinking about Liverpool at any point during his time at Villa, unless they are in opposition.

And if he is to eventually end up back at Anfield, he will surely need to be a success at Villa Park to get there.

Gerrard could have stayed at Ibrox and been revered and successful but has accepted the tougher, more exacting examination of his credentials in the Premier League.

This will be the more accurate measure of his standing and it is a reflection of the 41-year-old's drive and ambition that he has taken this option, with all the risks it entails.

He will know that if he is not a success at Villa then he can hardly rely on a glorious past to automatically put him in the frame as Jurgen Klopp's potential successor.

Liverpool owners Fenway Sports Group will be fully aware of Gerrard's iconic status at Anfield but they hardly give the impression of being the sentimental type when it comes to their management style.

Gerrard is confident enough in his own ability to believe he will be successful at Villa, then let the chips fall where they may.

His detractors have been quick to point out he won only one trophy in three-and-a-half years at Rangers, but this was the club's first Scottish title in a decade, overturning an era of complete Celtic domination while having a 72% success rate in the domestic league.

They went through last season's 38 games unbeaten, a remarkable feat by any standards.

It was also the title Celtic wanted more than any other in their attempt for 10 in a row. For that alone, Rangers and their fans will be forever grateful to Gerrard.

The former Liverpool captain has proved a popular, loyal manager with his players although he has never been afraid to exert discipline or hide from poor performances. This especially applied to his explosive striker Alfredo Morelos.

He has always been a straight dealer and searingly honest in his dealings with the media, a far more introspective, thoughtful and reflective character than his barnstorming and inspirational style of play in an iconic career might initially suggest.

The hallmark of Gerrard's Rangers teams was a solid defence, conceding just 13 goals last season to end with an outstanding goal difference of +79. He prefers a 4-3-3 system with adventurous use of full-backs.

James Tavernier, playing at right-back, scored 12 goals and had nine assists in the league last season, ending with a total of 19 goals and 11 assists in 46 games in all competitions.

Gerrard will demand the same standards from Villa's players as he expects from himself but they will also find a supportive head coach who will back them 100% if that is what they give him in return. 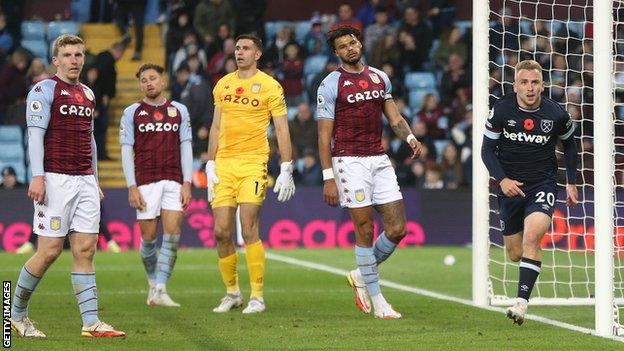 Villa, for their part, have appointed someone who remains Premier League box office from his time at Liverpool and who has taken impressive first steps in his managerial career.

There is an element of gamble in that they are appointing someone to his first Premier League job but Villa's faith is clear from the fact there was only one serious contender for the job once Gerrard made it clear he was willing to leave Rangers.

He inherits a team 16th in the Premier League and only two places off the relegation zone but there is no doubt Villa Park will be at its bouncing best when he takes his place in the technical area for his first game against Brighton on 20 November.

He will have high expectations to meet at Villa, as his predecessor Smith found out to his cost. Villa invested ambitiously in their squad even in the times before Jack Grealish was sold to Manchester City for £100m and that money was reinvested without hesitation.

Purslow talks regularly of continuous improvement and Villa may feel they still have time to hit their top six target given the players brought in this summer, such as Danny Ings, Leon Bailey and Emiliano Buendia. They certainly want better than last season's 11th place.

Gerrard will want new arrivals of his own and Villa's hierarchy has shown no hesitation in backing their managers, especially one who will be able to attract players on his name and reputation given his stellar status within the game.

Villa wasted no time in making Gerrard their man. Gerrard wasted no time in accepting their offer. It is a move not without its risks on either side but one that is already generating huge excitement among the club's passionate support.