Barcelona v Espanyol: Is it time for the Pericos to shine in the derby?

sports.lc
Admin
posted on 6 months ago
385
views
Espanyol fans call themselves the "wonderful minority". In a football-obsessed city such as Barcelona it can be hard to spot the club's blue and white jerseys amid a sea of blaugrana.

For almost 80 years Pericos fans have had to accept finishing below Barcelona and, while they can stomach living next door to a footballing "monster", the club's last visit to the Nou Camp proved a particularly traumatic day in the history of this traditionally-lopsided rivalry.

Luis Suarez scored in a 1-0 win for the hosts in July last year to confirm Espanyol's relegation to the second tier for the first time since the 1993-94 campaign.

"That was a hard one," says Ramon Orriols, who now lives in England and is part of Espanyol's UK-based supporters' club.

"Thankfully there were no fans in the stadium due to the pandemic - I think Barcelona fans wanted us to go down and disappear. They don't like us and want to have the whole of Catalan football."

Nico Melamed, one of Espanyol's most promising young stars, was an unused substitute that day and remembers the sadness among his team-mates.

"It was a bittersweet feeling because I was finally fulfilling my dream of playing in the first division with the first team and reaching all that I've ever wanted," he tells BBC Sport.

"But on the other hand it wasn't a result we wanted and by the end of the match it was very dark." 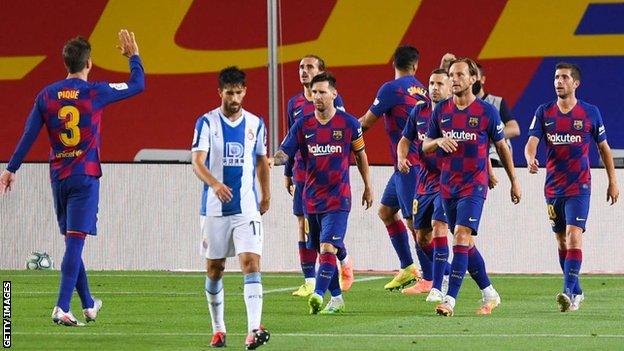 Head coach Vicente Moreno guided the club back to the top flight as Segunda Division champions at the first time of asking and, 16 months after that defeat, Espanyol head across the city in a far more buoyant mood.

They are level on points with Barcelona before Saturday's meeting - a rarity this far into a season - and hoping to be victorious on their rivals' turf for the first time since Mauricio Pochettino's side won 2-1 in February 2009.

"The derby is a special match," adds Melamed, who is set to feature in his first at senior level, having come up against Barcelona sides boasting Ansu Fati and Nico Gonzalez many times while in Espanyol's well-regarded "cantera".

"I used to go to the Espanyol stadium to watch most of the matches when I was a kid. I lived them as very special moments as a fan, so imagine how I feel now and having the opportunity to play, to live the moment and try to get the three points against a very good rival."

Javi Puado is another Espanyol youth product who understands the rivalry better than most, having also spent six years in Barcelona's academy.

"When the match starts, friendship falls apart and the rivalry begins," says the 23-year-old, who played alongside several Barcelona players for Spain at the Olympics.

"I have friends who support Barcelona and of course during this week we always like to talk and speak and we have a bit of rivalry, but in a good way!" 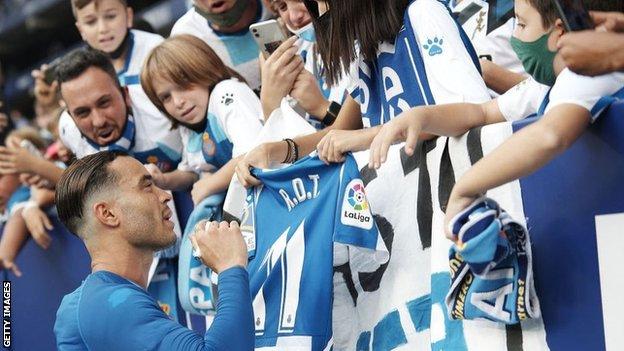 It is a rivalry that dates back to the turn of the 20th century. In 1899 Swiss Joan Gamper founded Barcelona and the following year students from the University of Barcelona responded by forming the exclusively Spanish Espanyol.

Tensions have previously simmered over who is more Catalan or about which side of the political debate fans sit on. More recently Barcelona defender Gerard Pique

has become the main protagonist, both in receiving unsavoury abuse and poking fun at Espanyol himself.

There is also a constant wrangling over the distribution of TV money in Spain, where Barcelona and Real Madrid receive significantly more than others. In Espanyol's last season in La Liga, they brought in almost £90m less from broadcasting revenues than the top two.

Not since 1942, though, have Espanyol finished above their world-renowned neighbours and, while only four teams have spent more seasons in La Liga, they have never won the competition, yet Barcelona have 26 titles.

"It is a very interesting rivalry," says Orriols. "I think 1860 Munich with Bayern Munich is the only one which is as strong and as unequal as Barcelona versus Espanyol.

"There is an Italian word 'sorpasso' that means to surpass. Winning against them in their stadium and passing over them would be the starting point of changing this dynamic."

Orriols suggests people in Catalonia support Barcelona because "they think that is the right thing to do" and says many believe Ronaldinho and Lionel Messi are still at the club.

Of course, most Barcelona fans would argue differently.

The Nou Camp is just four miles from the RCDE Stadium, located to the south-west of the city, but such is the club's global reach they dwarf Espanyol in both membership numbers and social media followers.

"Each of us Pericos grew up in an environment where you were the only one supporting your team," says Orriols. "If you see someone on the street with an Espanyol shirt, it is a special feeling."

Dani Perez, who lives just outside the city, calls Pericos the "resistance" because they are hugely outnumbered by "Cules", as they know Barcelona supporters.

"For Barca fans, losing to Espanyol is very poor. On the other side, for us, it is the day of the season," adds Perez.

"If you see media here in Catalonia you realise it is all supporting Barcelona and, with a new coach, it seems they have to win." 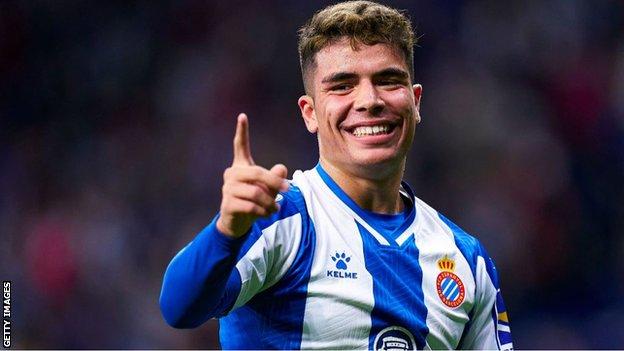 Nico Melamed is Espanyol's number 21 - the shirt was worn by former player Daniel Jarque, who died in 2009, and is now awarded to one of the club's homegrown players

That new coach is club legend Xavi Hernandez, whose return is likely to bring fans back to the Nou Camp after attendances dipped below 40,000 last month, though only around 500-1,000 Pericos are expected.

Espanyol have already beaten Real Madrid this season and there is a sense among the squad they have become stronger for the experience of playing in the second tier last term.

"There is a great atmosphere in the changing room, everybody gets on very well and we really like being here, training with our team-mates," explains Puado.

Ultimately, wearing the blue and white is about realising the club's mantra and becoming part of the "strength of a feeling".

"When you arrive at Espanyol you realise how the club is, how the people are, and like it or not you end up being from Espanyol, whether since you were little or not," says Melamed.

"Being a Perico is something different, it's something you really feel from within and, when you play in a match, you feel and think, 'as a Perico, what else can I bring to add in the game?'

"It means to represent the club with humbleness, ambition, a big responsibility and a great pride from the moment you first get to the club to the moment you play - or any other time you have the Espanyol symbol on your chest."