sports.lc
Admin
posted on 6 months ago — updated on 6 months ago
369
views
Dean Smith was an Aston Villa supporter who lived the dream by becoming manager, but after just over three years, promotion back to the Premier League and a cup final, he was relieved of his duties at the weekend.

Five straight defeats, including against Southampton at St Mary's on Friday, caused the board to act and though supporters loved him, some feel the timing was right.

But after the £100m sale of Jack Grealish, their homegrown captain and the man they relied upon most, to Manchester City, Smith's task of reinventing Villa while pushing for the top half was always likely to be difficult.

Villa received a lot of plaudits for their open handling of the Grealish affair over the summer, with a video statement from chief executive Christian Purslow outlining their contingency plans.

Although Buendia fitted the bill as a playmaking replacement, a system change pointed to a different emphasis, namely attempting to pair Ings in attack with last season's top scorer Ollie Watkins. Injuries denied Smith the opportunity to play the trio in the same team.

Ings scored twice in his first two league games for the club but has only added one more in seven appearances since. Buendia's only goal secured a point against Brentford in August, and Bailey scored against Everton in an emphatic home win, but consistency has been hard to find.

By the same point last season, Grealish had scored four goals, including two in the 7-2 win over Liverpool.

"They had a good window," he said. "Buendia hasn't quite fired yet, Bailey and Ings have had injuries. The start hasn't been great, but neither has it been an absolute catastrophe." 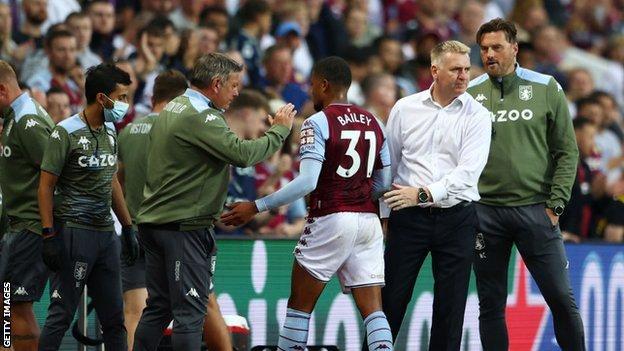 How have Aston Villa missed Grealish on the pitch?

One of the reasons behind Smith's departure was a longer-term malaise - his side lost 18 Premier League games in 2021, a run stretching back to the second half of last season when Grealish was still at the club.

But the England international was out with a shin injury in March and April and only actually played in five of those losses.

A look at the data shows just how much the 26-year-old's creativity has been missed - and how Villa have struggled to replace his attacking output.

Last season, Smith's side created 2.1 big chances per game in the Premier League, and that has fallen to 1.2 this term.

Their chance conversion rate has shrunk from 43% to 38.5%, and it appears getting the ball into the box has become a real problem, with shots from inside the area down from an average of 9.1 per game to 6.9, despite two main strikers being on the pitch together. With that said, Watkins has found himself out wide at times.

Buendia is the most natural replacement for Grealish, but is failing to match the former captain's creative output from 2020-21.

While Grealish was averaging 2.1 shots per game, the Argentine has managed just 1.3. Grealish completed 2.7 of 4.5 attempted dribbles per 90 minutes, Buendia has so far completed 1.7 of 2.6.

In terms of chances, including assists, Grealish created 3.3 per game, 0.8 more than Buendia.

Was Smith given time to adjust?

Dan Morgan from the Heart of the Holte podcast says Smith's reign has been the highlight of his time following the club, but admitted the pressure was building.

"Within the last six months, our identity has been taken away from us," he said.

"It shouldn't have come as a surprise that when Manchester City came calling, Jack would leave. Seeing Dean go has broken my heart but since January he has won just three games without Jack.

"Any manager who loses five games in a row is always going to be under pressure."

Former Villa defender Micah Richards was surprised Smith, having guided the club up from the Championship to the Premier League and then kept them there, was not given more time.

"From where he started to where he took them, surely you want that backing from the owners," said Richards. "I think it was too early; when investment comes, expectancy always follows.

"We know how passionate the Villa fans are. Throw money into that equation and it is always going to be difficult."

Who is in the frame to replace Smith?

Rangers boss Steven Gerrard is on the shortlist of candidates to take over, while ex-Roma manager Paulo Fonseca, who recently spoke to Newcastle, has been linked with the post too.

Richards believes only the very best will represent an upgrade on Smith.

"You might as well go out and get a top, top manager, because otherwise, whichever manager comes in is not going to feel good enough and you might as well stick with Smith," he said.

"He knows the club inside out and he's not had a full chance to do what he set out to at the start of the season."

Sutton believes Gerrard would take the job were he offered it.

"Eventually, Steven Gerrard will come back down south," he said. "There is talk he'll end up at Liverpool, but he needs to learn his trade at a club like Aston Villa, who are not going to challenge at the very top."

Losing their best player does not fully explain Villa's recent struggles. Only Norwich and Newcastle have conceded more than them, with England defender Tyrone Mings recently dropped for the defeat to West Ham after a poor showing at Arsenal.

But finding a solution to the Grealish issue was a challenge for Smith, and that will be no different for whoever his replacement turns out to be.